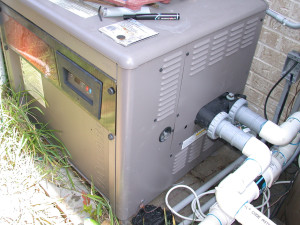 An Alliance heat pump is a refrigeration device used to transfer heat from one room or space to another. The heat pump is designed to take heat from a medium-temperature source, such as outdoor air, and convert it to higher-temperature heat for distribution within a structure. By means of a specifically designed reversing valve, the pump can also extract heat from the indoor air and expel it outdoors.

Because a heat pump system in Alliance uses the reverse-cycle principle of operation, its operating principle is sometimes referred to as reverse cycle conditioning or reverse-cycle refrigeration. The latter term is not correct because there are fundamental differences between the operating principles of a heat pump and a true refrigeration unit. The confusion probably stems from the fact that during the cooling cycle, the operation of a pump is identical to that of the mechanical refrigeration cycle in a packaged air conditioning unit. The indoor coil function as an evaporator, cooling the indoor air. The outdoor coil is condenser, in which the hot refrigerant gas releases heat to the outside air.

The two principal phases of heat pump operation are the heating and cooling cycles. A third phase, the defrost cycle is used to protect the coils from excessive frost buildup.

The heating cycle of a heat pump begins with the circulation of a refrigerant through the outdoor coils. Initially, the refrigerant is in a low-pressure, low-temperature liquid state but it soon absorbs enough heat from the outdoor air to raise its temperature to the boiling point. Upon reaching the boiling point, the refrigerant changes into a hot vapor or gas. This gas is then compressed by the compressor and circulated under high pressure and temperature through the indoor coils, where it comes into contact with the cooler room air that circulates around the coils. The cooler air causes the gas to cool, condense and return to the liquid state. The condensation of the refrigerant vapor releases heat to the interior of the structure. After the refrigerant has returned to a liquid state, it passes through a special pressure-reducing device and back through the coils where the heating cycle starts all over again.

In the cooling cycle, the reverse valve causes he flow of the refrigerant to be reversed. As a result, the compressor pumps the refrigerant in the opposite direction so that the coils that heat the building or space in cold weather cool it in warm weather. In other words, the heat is extracted from the interior, cycled through the heat pump and then expelled outside the building or space during the condensation of refrigerant.

Because the outdoor air is relatively cool when the heat pump is on the heating cycle, and the outdoor coil is acting as an evaporator, frost forms on the surface of the coil under certain conditioners of temperature and relative humidity. Because this layer of frost on the coils interferes with the efficient operation of the heat pump, it must be removed. This is accomplished by putting the pump through a defrost cycle.

What Our Clients Say
About Harding Heating & Cooling

I called Harding's because I was satisfied with years of service, so decided to buy from a company I was familiar with. When a person calls for help it's nice to get a live person who answers the phone and is helpful. Nice to have calls returned also [...]

We are very pleased with our new furnace and air conditioner installation. The house is so nice and warm now we actually don't have to wear socks to keep our feet warm. Heat is circulating the way it's supposed to. Thanks [...]

If you are looking for an Alliance heating, air conditioning, indoor air or geothermal service company then please call 1-866-968-9276 or complete our online request form.